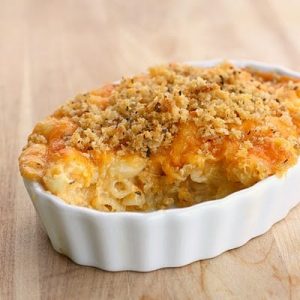 Traditional baked mac and cheese is such a comfort food. Make this one and gather the family around.

1) When making dishes like this it's better if you shred your own cheese. The pre-shredded cheeses have added ingredients to make the cheese not clump together and makes them not melt as well. I actually used pre-shredded cheese here and it was fine but if you want it extra creamy shred your own.
2) People that did not have success with this recipe did not salt their pasta water correctly. You want to salt it so much that if you tasted the water it would taste like the ocean.
3) You need SHARP cheddar cheese. That's what gives it flavor. Don't use mild.