Home » All Recipes » My Ben and Jerry’s Visit

My Ben and Jerry’s Visit 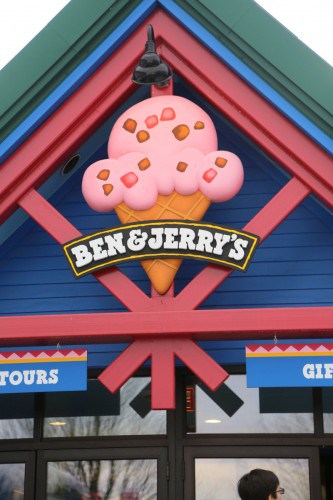 When Ben and Jerry’s offered to bring me out to their headquarters in Vermont for all an all-you-can-eat, exclusive adventure it took me about 3 seconds to say yes. There were 15 bloggers from all over the country: L.A., Boston, Chicago, and Nashville. 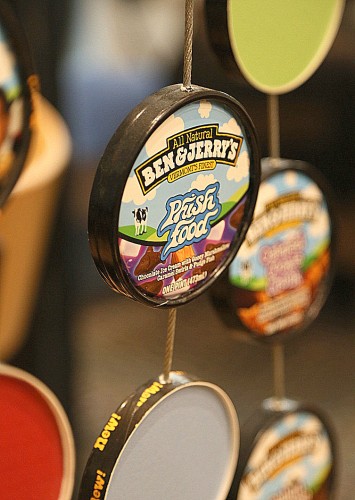 You see we’ve already shared so many moments over the years that it kind of felt like going home. Back in college I took a trip down to Havasupai which is at the bottom of the Grand Canyon. After a couple of days of camping and eating what little supplies we brought, we hiked the 13 miles straight up out of the canyon. Covered in dust, fatigued, and down a good 10 pounds we pulled into the nearest convenient store. I seriously had probably $10 to my name at the time and all I wanted was something cold and decadent. I bought a pint of “Phish Food” and ate the entire thing. That moment still stands in my memory as one of the best things I’ve eaten to this day. And I’ve eaten a lot. 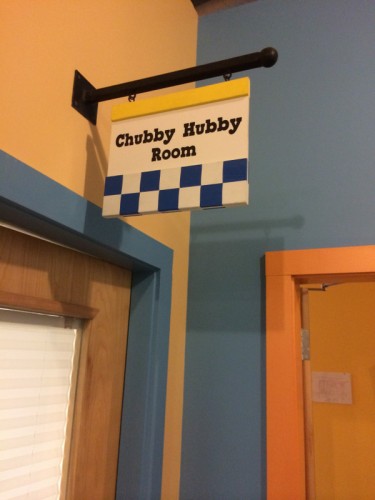 The nice people at Ben and Jerry’s welcomed us bloggers with a round of applause. Then they took us around the office and showed us the place. Every major flavor has a dedicated room. They have a massage room, a gym, and a slide. 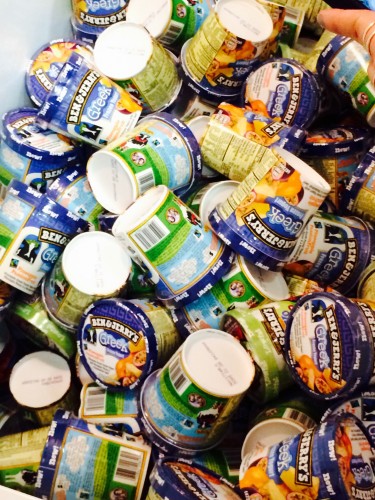 Every employee can take up to 3 pints home a day – hence the gym. 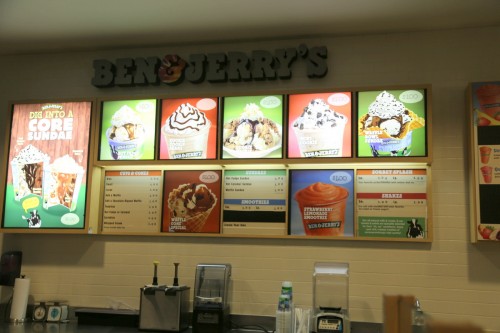 We spent most of our day at Scoop U where we learned about the ins and outs of Ben and Jerry’s. This is also where employees are trained and when training is in session the employees gather to taste the successes and failures. 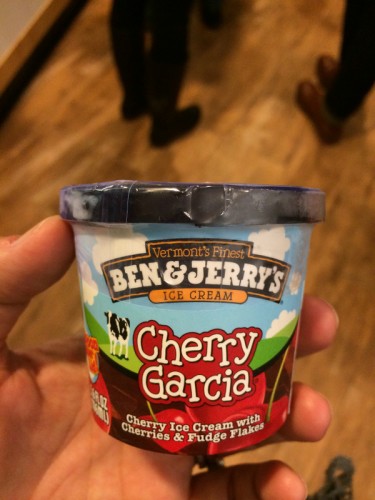 Our first meeting was at 9AM and of course I had to have a little snack while I listened. 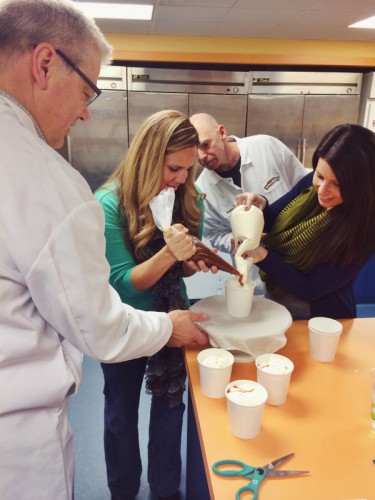 Then we headed down to work with the Flavor Gurus, Peter and Dave, to create our own flavor. If there was one job in the world that I covet, this is it. Their palettes are works of art. 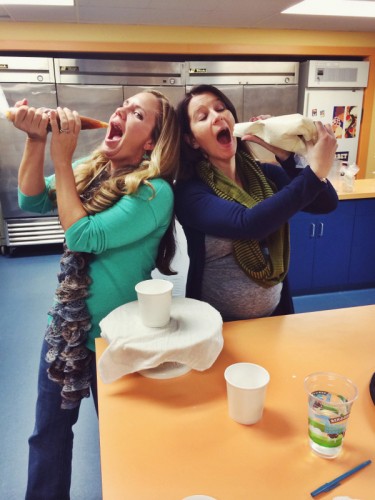 Tina, from Carrots n’ Cake, was my partner in crime and we had way too much fun swirling our flavor. 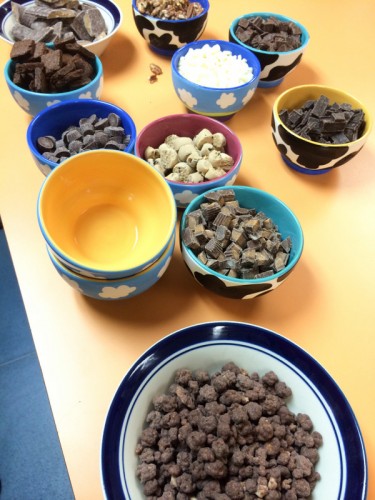 We chose chocolate covered potato chips, toffee, and a honey caramel swirl for our creation. It was the perfect mix of salty and sweet. 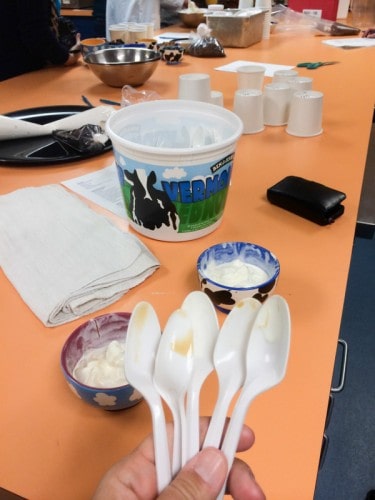 There was a LOT of taste testing. 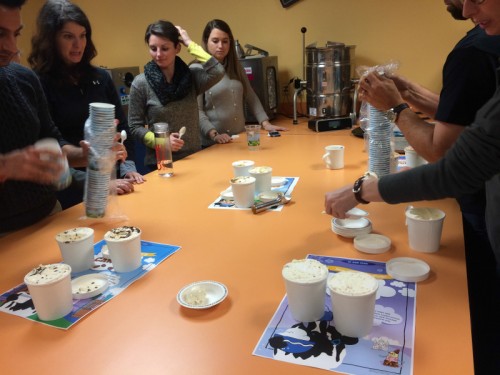 Then we tasted all of the other creations. Did I mention this was after we had sundae’s at Scoop-U? 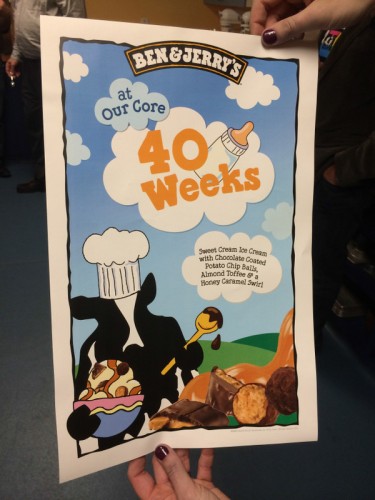 We worked with the creative team to create a cover for our signature flavor. Tina is 6 months pregnant so she inspired our flavor. Basically it was made up of goodies you would want to eat when you’re pregnant. The Flavor Gurus judged all of the flavors and ours didn’t win. 🙁 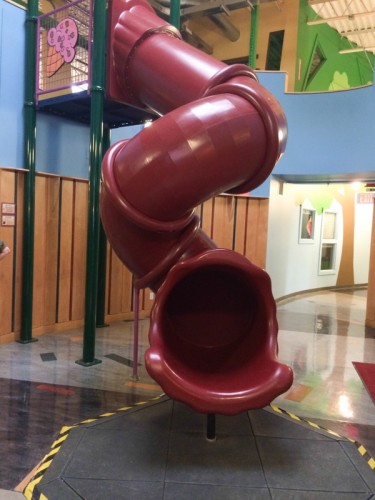 Then I went down this slide in their office 456 times to burn off all the calories I ate. 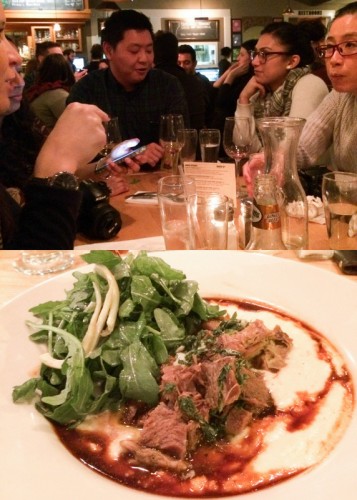 We ate that night at the Farmhouse. Amazing food. When you go out to eat with food bloggers the first 5 minutes of the meal no one touches their food. There are lots and lots of pictures. 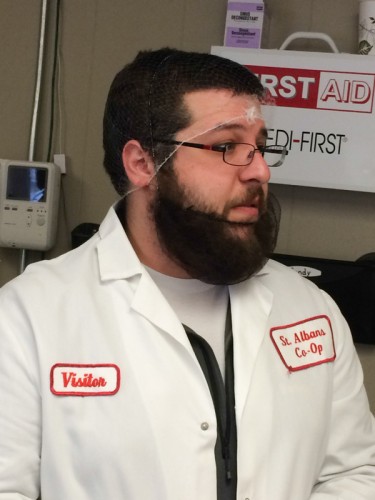 The second day we headed to the dairy to see where the milk for Ben and Jerry’s ice cream comes from. No cameras were allowed but I snapped a picture of Bobby’s beard hair net before we went in. I thought my husband would appreciate it. One thing Ben and Jerry’s supports is mandatory GMO labeling. You should be able to know what’s in your food. I couldn’t agree more.

They also believe in fairtrade which means farmers get a fair price for their product. So instead of trying to make the product the cheapest way possible they can make quality product and get paid fairly. Ben and Jerry’s gets all of their ingredients using fairtrade. Like I said. These are good people. 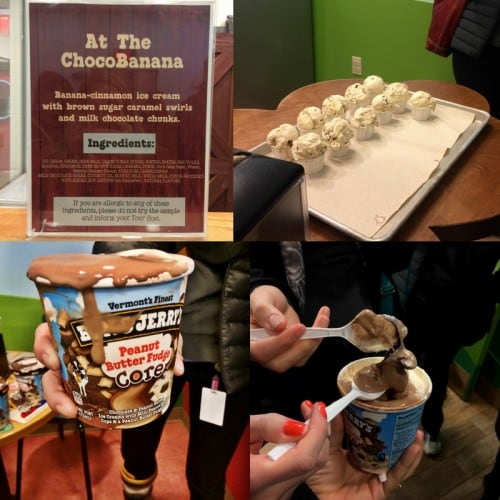 We then headed to the Ben & Jerry’s factory in Waterbury. We were able to watch all of the ice cream be made and dug in right after it came off the conveyor belt. We also tasted the new ChocoBanana flavor. Um, wow. Tastes like banana bread. I was thoroughly impressed.

I walked away from the trip loving Ben and Jerry’s ice cream even more. So usually when a company invites you out they expect something in return. Ok. Not usually. Always.

Not Ben and Jerry’s. They didn’t ask me to write this. They didn’t ask me to tweet. They legitimately just invited me out to experience what they do. They are full of love and integrity. Which is why they offer FREE CONE DAY (April 8th)every year. Because they are nice. They want to give back when they can. And that’s why I wanted to tell you all about them. Because I respect that.

So thank you Ben & Jerry’s for the once in a lifetime opportunity. 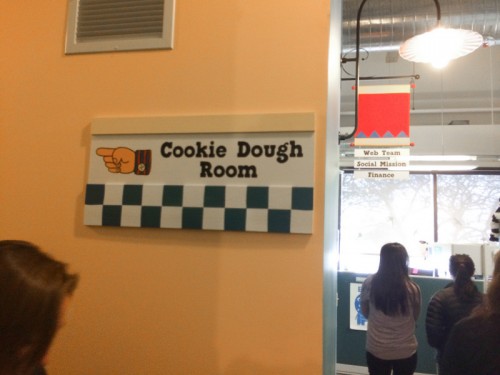 49 comments on “My Ben and Jerry’s Visit”

©2020 The Girl Who Ate Everything.
Design by Purr.
0shares