If you are looking for a crowd pleasing dessert, this Four Layer Yummy is always a hit. 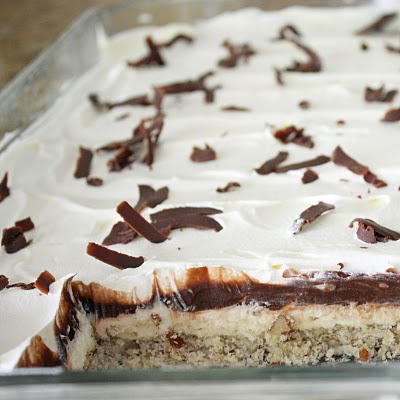 This dessert is definitely initially underestimated. When you think pecan shortbread with a cream cheese layer, then a pudding layer, then whipped cream…hmmm…sounds okay, nothing spectacular. But then every time I have had this I take a little square for myself and when I go back to get more…NOTHING LEFT! I seriously could eat the whole pan. The crust is the best part.

I made this in Arizona last time I was down and was taking pictures and my sister said, “Good luck making that look appetizing.” Thanks. Not that it doesn’t look appealing but it’s very creamy and doesn’t hold it’s shape especially outside in 115 degree weather.
My sister-in-law even made a low calorie version last time we were together using sugar-free pudding and low-fat whipped cream and it still tasted great. It’s versatile too. Try it with banana or even pistachio pudding.

If you love this Four Layer Yummy, you’ll love these recipes: 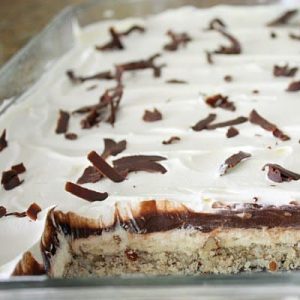